back to blog
August 06, 2014
The European App Economy 2014: Europe is losing ground to Asia
byMark WilcoxinBusiness

We have just published a research note with an update to last year’s an European App Economy report. The good news is that Europe’s app economy still accounts for 19% of global revenues and is growing strongly at a 12% annual rate. The bad news is that the rest of the world, particularly Asia, is growing much faster. The global app economy is growing at 27% annually and the share of revenues captured by developers in the EU28 is falling. We estimate that around 1 million European jobs have been created by the app economy so far. If policymakers want to see this job creation continue then there’s a lot more they could do to support developers attempting to create businesses. 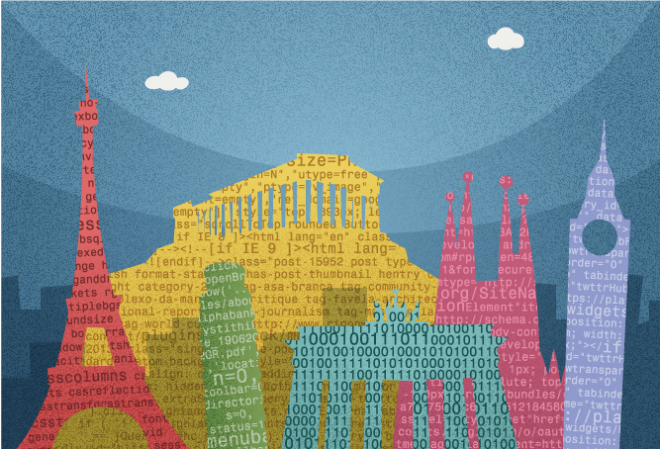 In our App Economy Forecasts 2013-2016 report we estimated that apps and app related products and services would generate $86 billion in revenues globally in 2014. The 19% share of this generated by European developers will contribute $16.5 billion to EU28 GDP this year. This is many times more revenue than is generated directly in the app stores. However, the EU is home to the top 2 app store earners globally in Supercell (Finland) and King (UK) – masters of the Free-to-Play games market. At the same time, European policymakers are some of the most vocal in attempts to enhance consumer protection with respect to the Free-to-Play model. So far there is only strong encouragement to reform practices around cost transparency but this could (justifiably) lead to regulation if insufficient voluntary action is taken. Significant changes in this area would undoubtedly impact the revenues of Europe’s most high profile app market success stories.

We estimate that the number of direct European app economy jobs is up 26% from 2013 to 667,000, this breaks down as 406,000 professional developers and 261,000 non-technical roles in app-related business. Using a conservative multiplier we also estimate another 333,000 jobs have been created indirectly by the app economy in the EU28 for a total of 1 million jobs. A large fraction of these jobs are in software services companies taking the low risk route to profitability building apps on a contract basis. Contract software development is the most popular revenue model in Europe, favoured by 31% of developers. This may be partially due to the relative lack of seed capital for startup ventures in the region along with a relatively high cost of living versus most global competitors, making bootstrapping products more difficult. 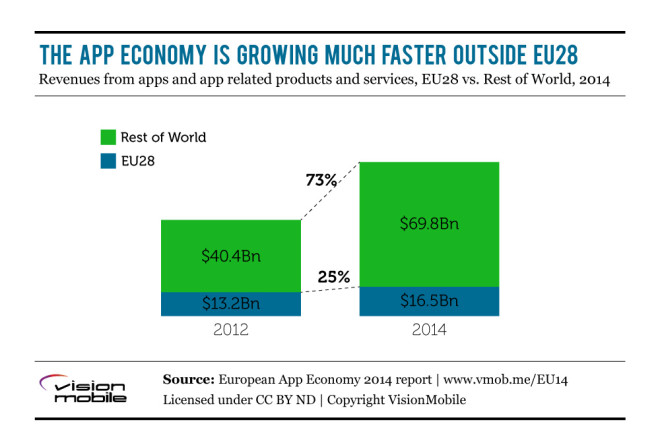 Although the European app economy is growing at less than half the global rate, some loss of share was unavoidable. Europe was very quick to reach high levels of smartphone penetration and most of the device sales growth is in developing markets. A significant fraction of demand for apps will always be filled by local developers with better market knowledge. As smartphone penetration increases in developing countries their local app economies are growing rapidly. European developers are well placed to export to English-speaking markets and South America but it’s not so easy for them to succeed in Asia. It’s likely that developers based in the EU will need specialist support or local partners to maximise app export opportunities in some of the fastest growing markets.

As smartphones reach saturation, businesses will play an increasing role in the growth of the app economy in Europe. In our Business and Productivity Apps report we forecast that this sector would experience rapid growth, reaching $58 billion globally by 2016. We have identified 5 areas where app developers and startups can add value in the business & enterprise app sector:

While European developers are well placed to win bespoke enterprise app development business, they may struggle to compete with better funded rivals from other regions for the larger opportunities. Starting a technology business has never required less capital but scaling an enterprise software business is incredibly expensive to do quickly. The biggest mobile SaaS, application management and vertical market opportunities are likely to be venture capital fuelled land grabs. To ensure that Europe makes maximum gains from the future growth of the app economy, policymakers need to do all they can to keep app entrepreneurs from relocating to Silicon Valley in order to access the expertise and capital they need to compete.